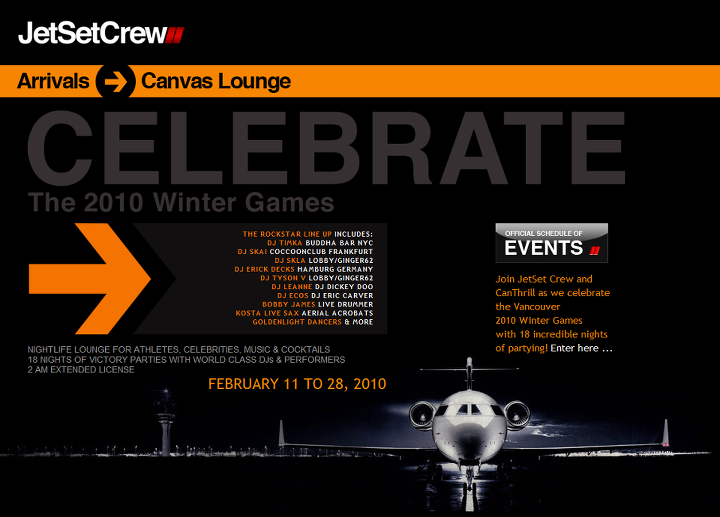 Featured Samples from this Project

JetSet Crew has been established for years as a producer of high-end celebrations and events catering to Vancouver’s socialites. Near the end of 2009, work began on a new project with an immense opportunity: a 3-week series of events to commemorate the February 2010 Olympic Games. Line49 provided tactical solutions including the creation of a Web-ready design from the client’s internal artwork and the organization of a massive media library. Read More

One of the key aspects of the new Web site was an upgraded payment system, which had to work nearly flawlessly in order to power the sales of hundreds of event tickets, night in and night out for over a month. Line49 integrated PayPal’s Website Payments Pro service into a custom-modified multi-event shopping cart sytem, allowing partygoers to snap up tickets for multiple nights of celebration with close to zero issues and without ever leaving the JetSet Crew website. This meant one less stress for the client during some of the busiest times imaginable.The series of events was a stunning success, attracting international athletes and household-name celebrities. Most notable amongst the dozens of dignitaries in attendance were Canada’s darlings of the moment: the medal-winning athletes who provided the greatest Olympic triumph in Canadian history. The Web site’s library of photos, video and press clippings lives as an archive of those memorable days when Vancouver was the center of the world’s attention.

Note: since our clients can manage their own content, the appearance of live Web sites may to some extent not be exactly the same as when delivered